They don’t get much news coverage and aren’t our typical water babies but hey, we’re going to celebrate the Australian World Champion Beach Volleyball girls, in which Mariafe (pronounced Maria Fay meaning Mary Faith) Artacho del Solar is one half of the winning pair. 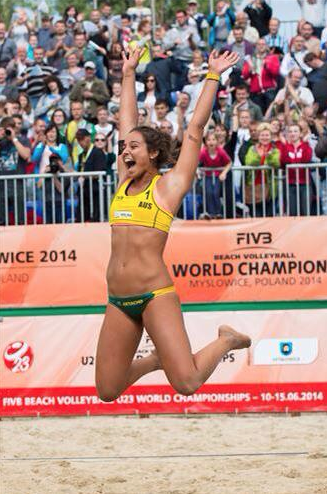 How old are you and where did you grow up? 20 yrs old. I was born in Lima Peru and moved to Sydney when I was 11 years old.

How did you get into beach VB and reach the elite level?  My brother Billy asked me to play a social beach volleyball tournament with him and his friends not long after I arrived in Australia as he knew I already played volleyball. Then at an indoor state camp, my first ever coach Dieter Rohkamper asked me to try a few sand sessions at Manly beach. Since that day I’ve loved beach volleyball and decided to keep training.

When did you start competing professionally?

When I turned 13 Dieter mentioned my name to the national coaches to get invited to go to a national beach volleyball camp/junior world selection camp. I attended the camp which went over 4 days at the Australian Institute of Sport (AIS) in Adelaide. A month after, I received a letter of selection to represent Australia in the Under 19 beach volleyball World Champs 2007.

Since 2007 I’ve represented Australia every year at either as an under 19, under 21 or under 23 in the world champs and it wasn’t till 2012 that I, with my partner back then Taliqua achieved a bronze medal in under 21 world champs in Canada.

After being part of the National Talent Identification program from 2007-2012 I got offered a scholarship in the AIS to train full time. After moving to Adelaide from Sydney to become a full time professional athlete I’ve represented Australia at various international tournaments including FIVB World Tour events.

What’s the best part of being a Beach Volley Ball athlete? We travel to amazing places and get to play in beautiful parts of the world whether it’s on the beach or at another playing venue it’s always a great set up! Also the people you meet along the way and the friendships we build. And of course, the sport on its own is so much fun I love it!

What’s a typical work out for you for your training? We train in the gym 3 times a week and on the sand 6 times a week. Gym sessions include weights, stability control, ergo, and specific controlled exercises required for beach volleyball. On the sand we have skill and technical sessions as well as game situation drills and speed and agility sessions too.

The best sand in the world is…. Home sand!! Love Manly!

What’s it like working with the Australian Institute of Sport? It’s a lot of hard work, it requires a lot of commitment, discipline, determination, focus. It’s a high-performance environment and everyone has high expectations from each other on and off the court.

What gets you pumped in the morning? The feeling of winning! I love competing I love winning!

Favourite not so healthy treat? I love desserts! Anything that has chocolate in it!

Top 5 songs on your playlist at the moment? 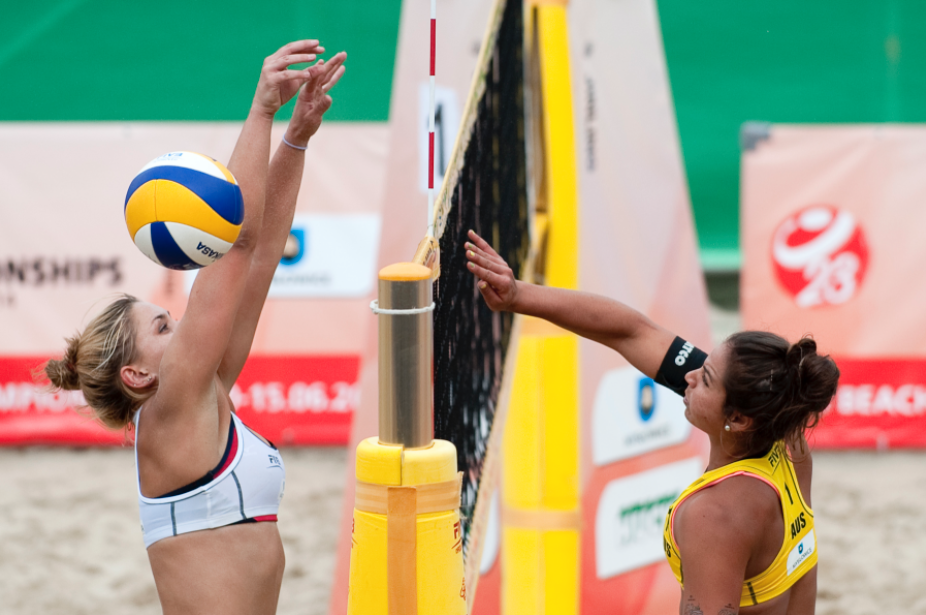 What are the highlights of your career so far? Under 21 Asian Champs 2013, 9th at the Grand Slam World Tour event 2014, Podium results in the last 3 Asian Tour Events, Bronze medal at Under 21 World Champs in 2012 and of course our GOLD with Nikki Laird at the recent Under 23 World Champs in Poland

What’s next on the calendar?  Pre-season begins end of July so we are training in the gym 4 times a week and on the sand 3 times and back competing internationally around September.

Are the Olympics on you’re outlook?  YES RIO 2016! For an automatic qualification, we need to be in the top 16 in the world by 2016 if not then we can still qualify through our Continental Cup which for us is Asia and come first place to grab a spot in the Olympics (this Continental Cup process works like Davis Cup in Tennis) so an extra Australian team is selected and they become a part of our qualification when we win (I was in this position when Natalie Cook qualified for London 2012).

The Mermaid Product Reviews are an honest review of a products provided to us. They are tried