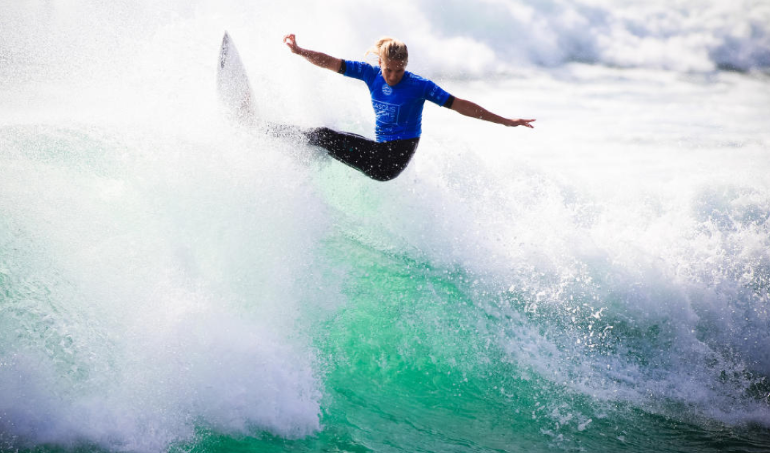 It could have been the World Tour decider but Sally Fitzgibbons held on right to the end. Stephanie Gilmore could have taken the World Title during this event if Tyler and Sally didn’t make it past the quarter finals but both scorched their way through. Sally making it an all Aussie battle against Steph in the finals and keeping the title within her reach to be decided at the Target Maui Pro next up in Hawaii. By winning this event Steph is now in number 1 position going into the last event of the year. Check out the finals in the clip below…

Steph showed powerful and stylish consistency all event coming off her win at the Swatch Trestles Pro is some average waves to make the final. She said after the event “I can’t believe I won this event, I was struggling in these waves but I managed to find two pretty decent scoring rides. Sally (Fitzgibbons) was super tough to beat and that was a really hard one, it’s so crazy, I’m so happy I won! I’ve had such an incredible time here in Portugal, Cascais, it’s such a beautiful town and I think when you feel happy in the place that you are you always seem to get a good result.”

Sally fought tough against an in form Courtney Conologue and Malia Manuel who have been making themselves know this event. Sally, now in 2nd place on the tour rankings said “It was an amazing battle and a great Final, Unfortunately I fell one short, but I’ll pick myself up and keep moving forward. I’ve been coming to Portugal now for a number of years and every time I’ve been greeted with such warmth and I couldn’t have asked for much more. To come in and be the runner up and still have amazing fans cheering for me on the beach, that’s really special and very memorable.”

The next and final stop for the women is the Target Maui Pro from November 22 – December 6, 2014.

Highlights from the Cascais Women’s Pro are available at ASPWorldTour.com.

CLIP OF THE WEEK: Tyler Wright Discovers ‘The Snake’

VIDEO // PRESENTED BY RIP CURL When you're really (really) good at something, people will do a lot