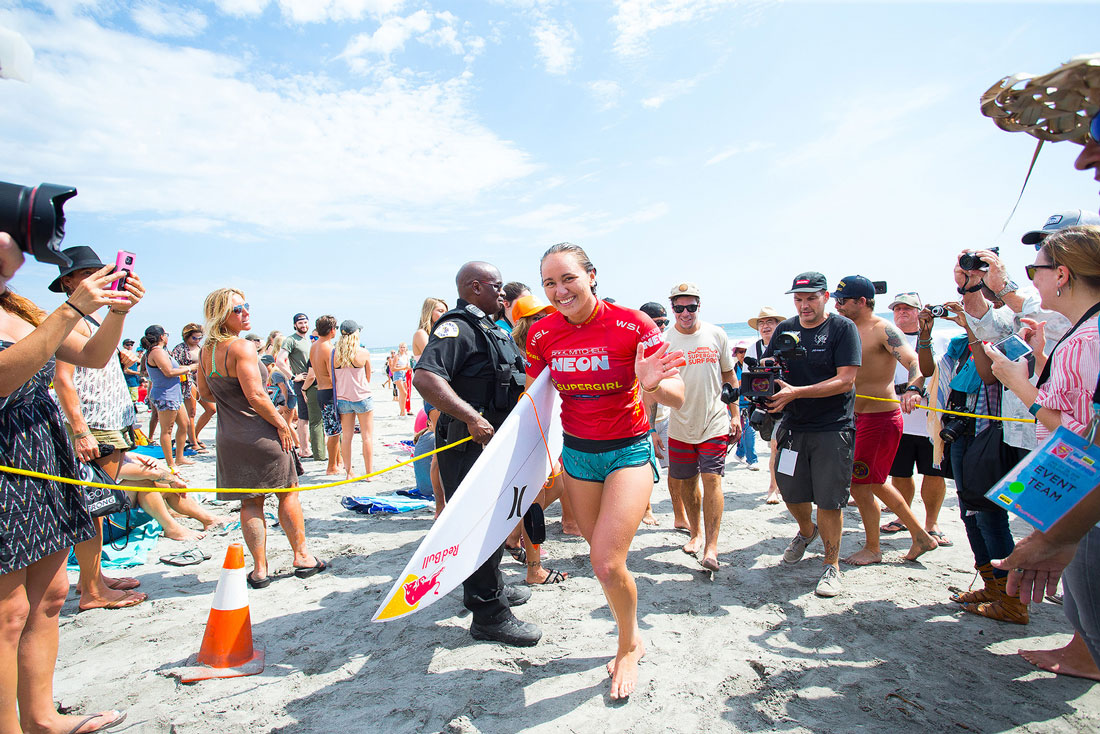 This marks Moore’s, three-time WSL champ’s first ever Supergirl Pro victory in her fourth attempt at the Supergirl win. “I’m so excited to have my first cape and this is such a great win which I haven’t been able to get all season,” Moore said. “I was happy to play the game a little bit better than I have this season…Caroline was a stand out that whole event and I knew the judges were liking what she was doing so it was going to be a tough Final. I just needed to do my own thing and hopefully the ocean was on my side – which it was so I was stoked.”

Moore took down fellow CT competitors Bronte Macaulay (AUS) in Round 5, Johanne Defay (FRA) in the Quarterfinals and, one of Supergirl Pro’s most consistent competitors, Malia Manuel (HAW) in the Semifinals.

The highly anticipated final kept spectators anxiously awaiting the opening exchange, and the girls did not disappoint with their preformances. Moore opened up with her trademark power surfing and earned a close to perfect 7.67 to start, which Marks nearly matched with a 7.00. But, the Hawaiian added a 6.17 and put the pressure on which the young talent was unable to overcome. Marks was close with a 6.10 when needing a 6.85.

Although taken out in this event by Moore, Marks continues to be the best in women’s QS history – already accruing 22,200 points and still has two more QS 6,000 events left.

“I was really close in that heat, but sometimes it goes your way and sometimes it doesn’t, and I was really happy with the way I surfed so I’ll carry that confidence into next week… To have a heat with Carissa [Moore] is great, I just had one with her in J-Bay and she’s one of my idols, but now I’m trying to beat her which is funny,” Marks added.

Coco Ho’s (HAW) impressive performance started with a massive win over current CT No. 2 Lakey Peterson (USA) in Round 5 before taking one of the QS’s top threats Philippa Anderson (AUS). Marks overpowered these performances, and eventually took the win over Ho.

“To have someone like Caroline [Marks] so fresh and exciting, I’m just happy to be amongst it. We were really lucky again with waves this year and it’s so blessing to have this event leading up to a big week in Huntington is it’s own little secret to success,” Ho said “Every event you enter you want to make sure you’re getting something from it and to get those valuable points was really important for me.”

An event of helpful points for most of these girls. Now they are on to a big week of world class performances in Huntington Beach, CA for the U.S. Open.

FEATURE // VIDEO  She's now 18. For her 18th birthday in February, she went to Tahiti and got