Since it’s inception into the world of soap operas in 1998, Home and Away has portrayed a laid back, iconic Aussie lifestyle and endless Summer in Summer Bay (or Palm Beach NSW, Australia). As a local resident it’s always been awesome watching the cast and crew roll in each week to shoot the award winning television series… watching the cast (except Alf) come and go and sometimes come back from the dead. There has always been at least one character who is a surfer, and well, it’s laughable how ‘un-surfer’ they look but Bonnie Sveen who plays Ricky has changed all that she’s even raised the bar by taking her very own board on set and the very first longboard in the show’s history.

As an outgoing, outdoorsy and active woman Bonnie has spent her whole life playing and participating in sport and even though she was never a big swimmer growing up, threw herself in head-first to experience surfing as an adult and has joined The Mermaid Society – us girls of the sea.

Bonnie’s heritage from Norway shows with her beautiful clear complexion with gentle splash of freckles from the Aussie sun complimenting her bright blue eyes and blond hair. All her features beam the love of her new found lifestyle choice between living at the Iconic surfing mecca of Bondi Beach and shooting on the set of Home and Away. All this, from her home in Tasmania where she grew up mucking around in the local cold water rivers and parks and her closest beach being a quaint beach called ‘Snug’, South of Hobart where the water is a bleak 14 degrees and nothing to get too excited about.

Before booking Home and Away she had worked overseas… “When I came back it just became clear to me that this is where I was meant to be, this is my home and my culture. Getting the part on Home And Away was amazing to get a job that was central to mainstream Australian Television and is based around the ocean.”

“I’ve always had an affiliation with the water but now I just want to get out there and catch waves and make any excuse to be in the ocean.”

Bonnie first got hold of a surfboard shortly after finding her feet in her new job and what inspired her was simple…”On set I was having to carry a board up the beach. I pretty much, didn’t want to look like an idiot; Naturally I wanted to hold it right and know what to do with it. My character Ricky is a Pro Surfer and I was pretty hungry to spend as much time as I could in and around the water and so made sure it became a big part of my life. I went up the coast with a friend and jumped on the board and paddled out.”

It was just over a year and a half a go Bonnie picked up a longboard and took her first paddle out with a friend in Umina, NSW before heading further north to feed her new found love, to The Pass at Byron Bay with a long right-hander that really got her going.

As an adult any water sports especially associated with the ever-changing ocean, surfing can be a very confronting and scary experience. All of a sudden you feel vulnerable and out of your depth in this gigantic mass of ocean. For Bonnie, this experience was empowering and a way her her to channel some of her extroverted emotions…

“Learning as an adult is tough, you want to have much more control over what you’re doing than when you were a kid and that’s probably why people find it so confronting, but that’s why I go out there.”

“I love the ability to surrender to the sea and learning to bring that feeling into my life on land.”

“It’s so meditative for me to be out there because you’re being consumed by something bigger than you and you just have to listen to it… if you don’t you’ll get smashed. That’s why it’s so therapeutic.”

“All the reasons that deter a lot of people from learning to surf as an adult have kept me engaged and eager to keep learning. It was a challenge that I wanted to over come. My need to be in the water overrode being smashed by the waves. I don’t mind being beaten in the water, I find it just puts you back in your place in the world. It’s healthy for everybody, there’s no social status and hierarchy it is the best way to keep you humble.” 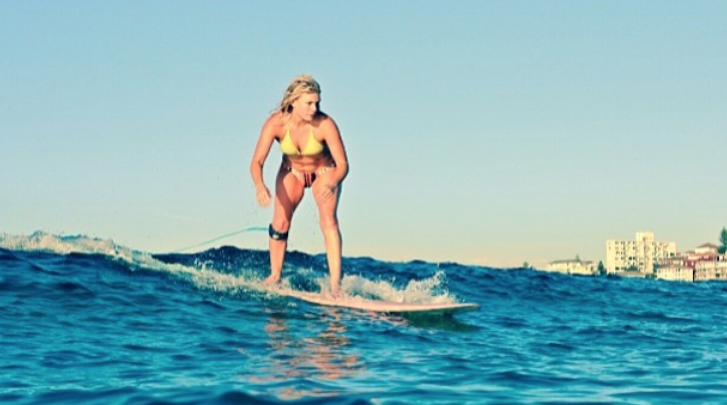 The most difficult barriers are always going to be the ones we can’t control but for Bonnie it was these barriers that just pushed her harder into the unknown, into a sport dominated by men and into a deeper connection with the ocean.

“It’s rare to find another girl to talk about surfing in the same kind of passionate way and it is amazing to connect with people who are surfing for the same reason as me.”

“The understanding of the water was probably one of the biggest difficulties; reading the waves, finding your placement in the water and surf skills like popping up and knowing what your body should be doing and where you should be looking.”

“I’m always thinking inward so I can’t blame the surf for giving me a bad experience. There is so much surf traffic at Bondi so the most difficult part for me is dealing with the people everywhere and being able to read the water when you’re not experienced enough to know what the water is doing and where it’s moving.”

“I’ve learned to respect that the ocean gives you whatever you need on the day.”

How you took your first paddle and progressed from there? “I did myself a favour and got a 9 foot board, strong and stable and yoga really helped with my movements and the pop up, I’m now progressing down in size towards a 6 footer.”

Get lessons or Free Surf Development? “I’ve only had one lesson but I meet up with people every day and get out as much as I can, I try to get out in the water at least once a week with people who inspire me in the waves.”

The wave you’d one day love to ride… “I think we’re pretty spoilt in Australia there are some amazing breaks, really I don’t even need to leave the state. But I want to be able to take on all kinds of breaks and get my skills up enough to take on all different waves and shapes.”

Your quiver at the moment, no doubt to be expanding…? “I’ve been using 7’6 Foamie and regularly a 9′ Malibu but I do own two vintage 5’10 boards that I picked up at a garage sale last year!”

Your favourite wave riding attire? “I hate wetsuits but I picked up a Rip Curl Flashbomb last year which was a good incentive to get out there in the middle of Winter it’s like taking your doona out with you. Being a Tasmanian I’m a bit tougher with the cold water and I just love to get out there and be free and unrestricted in just a bikini.”

Everyone’s journey as a surfer differs and for Bonnie it’s just beginning. The opportunity to convert a sport into a daily ocean therapy and emotional converter of strength and challenge. It’s a feeling that is irreplaceable, that is different to anything else you could ever experience. A connection and development… As Bonnie says  “It’s a chance to clean the slate and start the day again. I’m so curious about surfing and I’d never disregard the possibility to one day become an instructor. I want to be able to share surfing love with friends and family and people are at the start of their journey.”

CLIP OF THE WEEK: Philippa Anderson’s Thursday Thread Through