The final day of competition at the 2015 Nicaragua Unica… Original ISA World Surfing Games presented by Lafise and Claro ended with an international celebration for the sport of surfing. Twenty-seven National Teams flooded the sands of Playa Popoyo, Nicaragua alongside thousands of spectators to cheer on the action.

The entire day was full of fantastic surfing in overhead to double overhead waves.

The lineup for the Women’s Final included Tia Blanco (USA), Leilani McGonagle (CRI), Ella Williams (NZL) and Chelsea Tuach (Bar). 2014 ISA World Junior Surfing Championship Bronze Medalist Blanco and Copper Medalist McGonagle took strong leads. However, by the end of the heat it was Blanco that would take the Gold Medal home for her country.

“It means the world to me, to win this Gold Medal for the USA. I am so stoked!” exclaimed Blanco, still in the awe following her win. “Getting carried up the beach by my coach and Damien Hobgood was a dream come true — it was one for the memory book. Thank you to everyone who believed in me, I could not do it without you.” 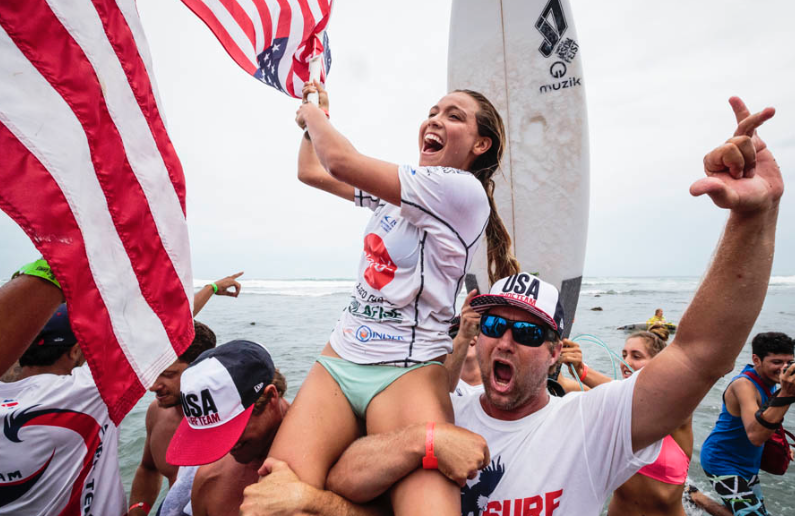 Tia Blanco is carried up the beach by her teammates after she won the Gold Medal in the Women’s Final. Photo: ISA/Ben Reed

With the combined effort of the McGonagle siblings in back-to-back finals, Costa Rica not only left with two individual medals but with the title of Team World Champion. The support of the people on the beach was powerful. During the closing ceremony, Team Costa Rica put their hands together near the front of the stage and were joined by fellow countrymen in the crowd for a final cheer of national celebration.

“This has been a historical week for surfing, the ISA and the beautiful host nation of Nicaragua. This partnership between Nicaragua and the ISA has produced best-in-class events year after year, while showcasing the perfection of its coastline to the world,” said ISA President Fernando Aguerre.

“Twenty-seven nations came together from around the world, for a phenomenal week of surfing on extraordinary waves,” continued Aguerre. “I want to thank each and every athlete for surfing in the name of their nation. More than medals, I hope every person leaves here with memories of the outstanding ISA event and new friends from our international community.”

About the International Surfing Association:

ISA membership includes the surfing National Governing Bodies of 96 countries on five continents. Its headquarters are located in La Jolla, California. It is presided over by Fernando Aguerre (Argentina), first elected President in 1994 in Rio de Janeiro and re-elected eight times since. The ISA’s four Vice-Presidents are Karín Sierralta (PER), Layne Beachley (AUS), Casper Steinfath (DEN) and Barbara Kendall (NZL).

The Martinique Surf Pro: Is This The Signal That Chelsea Tuach Is Back?

CLIP OF THE WEEK: Chelsea Tuach Switches Off To Play In El Salvador