We’ve been hearing so much SUP news coming out of the US as the Winter draws in and loads of records and goodness from the women’s divisions. None more exciting that this little mermaid Isabella Gomez, or Izzi to her friends.

Izzie took out a tight final against some of the world’s best SUPers in the recent event in California and although everyone was older than her she stood her ground and took to the water with head high. This 14 year old took the World Title home that Sunday and now stands as the youngest World SUP Champ.

Imagine the impact she’s going to have on the SUP world if she’s making waves like this at just 14? We can’t wait to see what this power house has in store for the future. We wanted to find out a bit more about Izzi Gomez and her gun moves on a Stand Up Paddleboard.

Tell us a bit about your win and your history with the event? All together I have won 5 Stand Up World Tour events, which led to my recent win of the 2014 Stand Up World Tour World Title at the Huntington Beach Pro. I was so nervous because the pressure was on for the title race. I had to surf a woman on woman heat in the semis with my good friend and mentor, Candice Appleby, which was tough. Once I got through that, then I met the current World Champ, Nicole Pacelli, in the finals. It was my dream to be the youngest athlete to win a World Title.

Where do you call home? My hometowns are Anna Maria Island & Jupiter, Florida though I recently moved to San Clemente, California USA.

What’s the best part of paddle board surfing for you? It gives me another way to enjoy the ocean when the waves are smaller.

Whats your signature or favourite move? I like frontside turns. They worked pretty good for me at Huntington in my last contest. 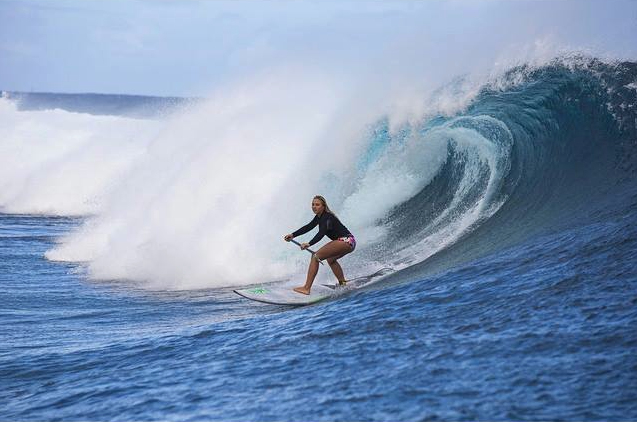 Do you compete for a club? I compete on the Stand Up world Tour and I like to do other surfing or SUP contests when I have a chance.

Can you explain the scoring of waves in comps and how it differs from surfing? Speed, Power, & Flow is usually what the judges look for, though it sometimes varies in different disciplines of surfing. They take your top two waves for your final score.

Any tips for getting amongst the waves?  It helps to be a strong paddler and have good stroke technique. I think SUP race training compliments SUP surfing because it will make you faster and stronger. I also recommend mixing it up with cross training so you don’t get burnt out.

What are your ambitions as an athlete? I want to push the limits. I would like to make an impact and to be known as a pioneer of the sport. I also want to be an inspiration to young girls and facilitate positive self image, since it’s such a growing epidemic.

Do you have any other sports that you love or compete in? I just discovered that I like beach volleyball.

What board do you ride and what else is in your quiver?

IZZI IS PROUDLY SUPPORTED BY…